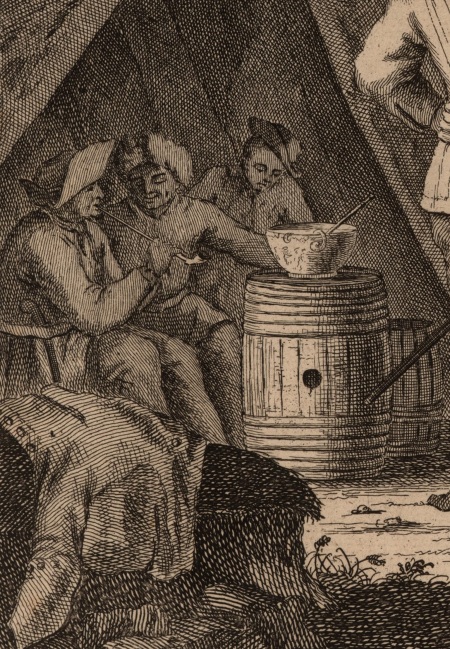 Excerpt from image of Capt. George Lowther and his Company at Port Mayo in the Gulf of Matique, 1734, showing pirates in a makeshift tent.

By 1716, New Providence stood as a stronghold for pirates.  Since past Bahamian residents and governments allowed pirates to enter and use their harbor for generations, this news surprised few among people familiar with New World maritime activity.  John Graves, a former customs collector in Nassau, published a prediction in 1707 that the Bahamas would become a, “Shelter for Pyrates, if left without good Government and some Strength.”  He further predicted, “that one small Pyrat with Fifty Men that are acquainted with the Inhabitants (which too many of them are) shall and will Ruin that Place, and be assisted by the loose Inhabitants; who hitherto have never been Prosecuted to effect, for Aiding, Abetting, and Assisting the said Villains with Provision.”1  Six years later, Grave’s predictions came true.

In the past decade, a premium channel television program, a billion-dollar video game franchise, and popular press publications all helped revive public awareness and interest in the Bahamas and its pirate past.  These shows, games, and books are consistent in the manner they present the history of New Providence.  In telling the stories of the pirates, the narratives usually centered on captains, their crews, and the British officials that confronted them.  The recent portrayals of Nassau tend to follow what Hollywood and artistic mediums has done for generations.  The romanticized image of the typical pirate base set at a remote Caribbean settlement features a group of wooden post-and-beam frame buildings, built near an elegant beach, and populated with pirates gallivanting with attractive women day and night.  This common media depiction, while appealing to general audiences, is two-dimensional.  This weak caricature does not delve deep into understanding what New Providence was like in 1716-1717, when Nassau’s pirate population was at its peak. END_OF_DOCUMENT_TOKEN_TO_BE_REPLACED