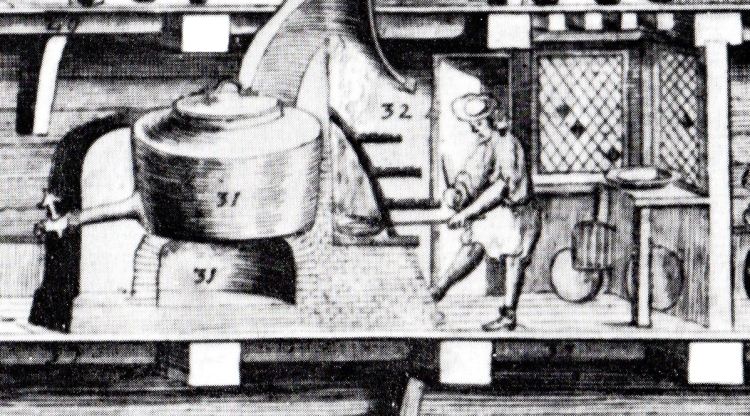 Ship’s Galley in a Thomas Phillip print of a first rate ship of the line from the 1690s. Note the ship’s cook with a knife in his right hand wearing an apron and possessing a wooden leg. Image printed in Brian Lavery’s “The Arming and Fitting of English Ships of War, 1600-1815” on page 196.

Prologue: Due to the amount of content on this subject, this article is broken into two parts. The second part will be published several weeks from now.  Special thanks to Jeff Pavlik for his consultations regarding period ship’s biscuits.

UPDATE, 9-8-2018: Many people have asked if I will complete part 2 of this article. Since this is one of my most popular posts, I will respond.  As of now, my main priority is to complete my maritime clothing book, so any work on maritime food will have to wait until that is completed.  In addition, after doing work on this post, I realized that the subject is extremely large, and that if I wanted to pursue it further, I would probably want to publish it in some other format beyond a post on my website.  This is also why I removed “Part 1” from the post title.

“Englishmen, and more especially seamen, love their bellies above anything else.”[1]  This classic quote from Samuel Pepys summarized well the significance of food to sailors during the Age of Sail.  Mariners could endure hard work and ragged clothing, but had little patience for short rations or rotten provisions.  Pepys recognized this when he work for the English Royal Navy, and that, “any abatement from them in the quantity or agreeableness of the victuals,” could turn sailors against serving the Navy.[2]  The stereotype for the diet of sailors during the Age of Sail included ship’s biscuit, salt pork, and rum.  Many people at sea in that era ate or drank all the items in this cliché menu, but also consumed many other foods and drinks.  Since food played a significant role in the lives of sailors, exploring the specifics of their diets can provide more insights into their experiences at sea.

Attempting to answer these questions, specifically for sailors who sailed between 1680 and 1740, offers a glimpse into a somewhat neglected period of maritime history and provides context to future food choices for mariners in the Revolutionary and Napoleonic eras. END_OF_DOCUMENT_TOKEN_TO_BE_REPLACED