Excerpts from “The Sailor’s Parting,” by C. Mosley, 1743. The image includes depictions of a hammock, sea chest (with initials), and simple bag.

The sea chest is a common piece of material culture seen among stereotypes of pirates and sailors in the Age of Sail.  Many people imagine a variety of items locked away within these chests, from fascinating tools of the seafaring trades to treasure plundered during many adventures at sea.  In the realm of stories about pirates, Billy Bones owns the most famous sea chest of all fictional pirates.  In Robert Lewis Stevenson’s Treasure Island, originally published as a serial in Young Folks magazine from October of 1881 to January of 1882, Bones was the first mate of the pirate Captain John Flint.  The exterior of Billy’s sea chest was, “somewhat smashed and broken as by long, rough usage,” with a “B” burned to its top.  Stevenson described the contents of the sea chest in detail, including items concerning the story’s treasure, such as Bones’ account book, a bar of silver, a bag of coins, and a treasure map.  Beyond these pieces concerning the treasure, the chest contained a suit of clothes, “a quadrant, a tin canikin, several sticks of tobacco, two brace of very handsome pistols,…an old Spanish watch and some other trinkets of little value and mostly of foreign make, a pair of compasses mounted with brass, and five or six curious West Indian shells… [and] Underneath there was an old boat-cloak, whitened with sea-salt on many a harbour bar.”1  Contents such as these are typical by the standards of the modern stereotype of sailors and pirates in the Golden Age of Piracy.  When compared to the historical record, with exception to the treasure items, how accurate is Stevenson’s depiction?  What did Anglo-American sailors or pirates of the late seventeenth and early eighteenth centuries own?  Broadly speaking, some sailors of the era did own the kind of items seen in Stevenson’s stereotypical sea chest.  However, examining the historical record for traces of sailors’ possessions provides some insight into the lives of mariners in this era. END_OF_DOCUMENT_TOKEN_TO_BE_REPLACED 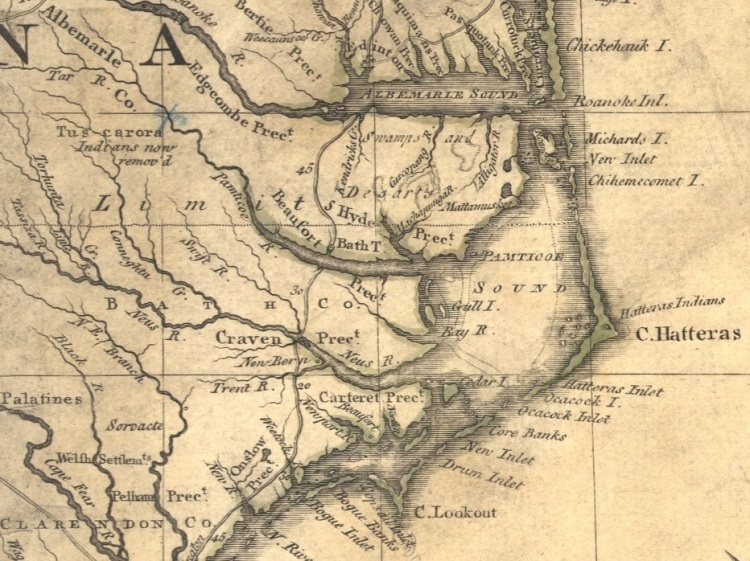 From 2012 to 2013, I participated in the recognition of the tercentenary of an historical event.  Before 2012, I knew little of the Tuscaroras, the Tuscarora conflict from 1711-1715, and the siege and battle of Neyuheruke.  The history of this event receives limited attention.  There are select groups who will know of this conflict, such as some North Carolina students, academics who study pre-American Revolutionary War colonial history or the history of the American Indian, and the Tuscaroras themselves that still live on today.  Thanks to a pair of conferences held at East Carolina University, in particular the one held in 2013, I am more aware of an event that deserves more attention in early American history.

Neyuheruke (or Neoheroka, there are several spellings) was an American Indian community located along the Contentnea Creek, near the present town of Snow Hill, North Carolina.  While it might be easier to call Neyuheruke a village or town, it does not fit the concept of a settlement with a central cluster of buildings.  There may have been a central plaza, but Neyuheruke and other Contentnea Creek communities featured scattered dwellings instead of a central group of buildings clustered close together.  During the Tuscarora conflict, Neyuheruke allied with several other Tuscarora communities against the Europeans (and their American Indian allies).  After a campaign led by Colonel Barnwell against the Tuscarora in early 1712, the people of Neyuheruke constructed a fort sometime between February and November.  In March of 1713, another expedition against the Tuscarora laid siege to this fort around March 1.  This force, under the command of Colonel Moore, consisted of 108 Europeans and 750 Cherokee, Yamassee, and other American Indian allies.  Inside the fort resided some 850 to 1,000 Tuscaroras.  After a three-week siege, the final assault occurred over a three-day battle from March 20 to the morning of March 22.  The hard-fought battle resulted in the Tuscaroras suffering between 350 to 450 deaths.  At least 400 remaining Tuscaroras became prisoners. Moore’s forces suffered 139 dead or wounded.  The Tuscarora prisoners returned with Moore’s men to South Carolina as slaves.  Many found themselves for sale in Charleston, and from there exported to various other parts of the Western Hemisphere, including Boston.  The capture of Neyuheruke’s fort marked the breaking of the opposition to the North Carolina Europeans, though smaller raids occurred until 1715.  In the long term, the conflict resulted in many of the remaining Tuscaroras traveling north to reunite with the Iroquois Confederacy and resume their status as the sixth Iroquois tribe. END_OF_DOCUMENT_TOKEN_TO_BE_REPLACED

One of the frequent questions asked online in general public discussions of pirate history is “What books do you recommend on pirate history?”  Below is a list of books on the subject with brief descriptions of their content and qualities.  Each of the titles reviewed here features a link to Amazon.com for convenience.

Under the Black Flag: The Romance and the Reality of Life Among the Pirates, by David Cordingly 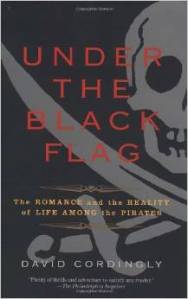 In the 1990s, David Cordingly’s work on historical pirates helped revive public interest in pirate history. His book, Under the Black Flag, presents much of the work presented in those efforts in an accessible style for mainstream readers. Cordingly presents a variety of topics on pirate history, including myths concerning pirates, Hollywood’s relationship to pirate history, general aspects of pirate life, and quick surveys of several pirates in history, including Henry Morgan and Captain Kidd. While the errors in his text and strange organization of his topics can be hindering at times, it is still a serviceable general introduction to pirate history.  Specifically, this book will greatly assist anyone who never read about pirate history and has only encountered them in the way Hollywood presents piracy.  The first chapter is particularly effective in dispelling many of the myths and Hollywood stereotypes that conflict with the historical record. For academic historians, Under the Black Flag is also a valuable piece since it is significant for those studying the historiography of pirate history. END_OF_DOCUMENT_TOKEN_TO_BE_REPLACED